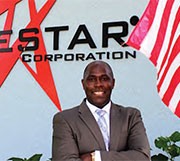 Published in the USF Magazine by Lorie Briggs | College of Business

Greg Celestan stands in front of a building with the words Celestar Corporation on a wall behind him.

When Greg Celestan, an intelligence officer with U.S. Central Command at MacDill Air Force Base, set out to create his own business at the end of his 20-year career, he turned to the Small Business Development Center at USF.
It was good strategy, says the retired lieutenant colonel.

“I had this idea…